Lawrie Demolition completed the installation of a new state of the art artificial football pitch in June 2013 on behalf of the Ministry of Defence on a waste bit of ground in Milton Bridge, West Lothian.

The works included the remediation and removal of asbestos containing materials that had been previously left in the ground. No easy task when the weather was some of the worst encountered for some time with the team onsite having to battle with flooding, gale force winds and heavy snow, before eventually ridding the 10,000m2 site of contaminants and clearing the way for the construction of the new 3G pitch.

With the import of some 9,500 tonne of crushed material, and the subsequent capping and levelling layers in place, it did not take long for the once overgrown, marshy field to be transformed with the laying down of a new lush green carpet in to what has been named Fusilier Field.

Soldiers from The Royal Highland Fusiliers, 2nd Battalion, The Royal Regiment of Scotland (2 SCOTS) hosted an Army football match to mark the opening of a new sports facility near their barracks in Penicuik on Thursday, 13th June 2013.

The new pitch, named 'Fusilier Field' is the brain child of Quartermaster Major Alan Grant of 2 SCOTS.  Major Grant said: “The pitch is the result of more than a year’s hard work. When I took over the job as Quartermaster there was a lack of sports facilities available to the 'Jocks'.  He continued: "I fought hard for this facility, there were a number of set backs but I never accepted no for an answer. I’m sure the remainder of the battalion will be delighted when they return from Afghanistan - the area that is now the sports field was rubble, now it is an all singing all dancing Astro Turf pitch. I am really proud of what has been achieved here. I would also like to thank 51 (Scottish) Brigade based in Stirling for all their hard work and support in helping the project get underway. They have been instrumental in helping and without whom we would not have this pitch today”. 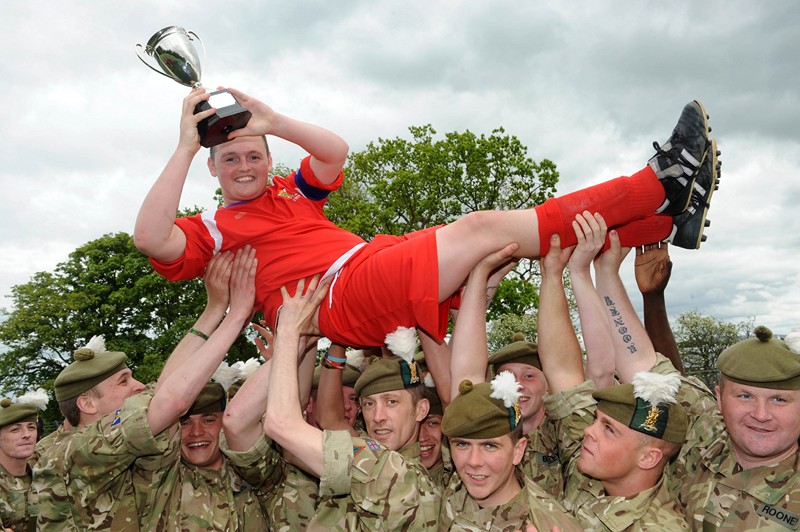 The match is designed to be a standing testament to Walter Barrie, whose love and passion for football was well known. This annual game will be a fitting memorial to Walter, who was tragically killed during a football match which he had organised between the Afghan National Army and 1 SCOTS in November 2012.

The sports pitch was officially opened by Mr John Rennie, Defence Infrastructure Organisation (Scotland) who were responsible for the construction of the facility;  and Lt Col Natasha Nash, representing 1 Mechanical Brigade who 2 SCOTS are attached to in Afghanistan.

For further information please contact Fiona Mcnaught at the Army Press Office on 0131 3102091.